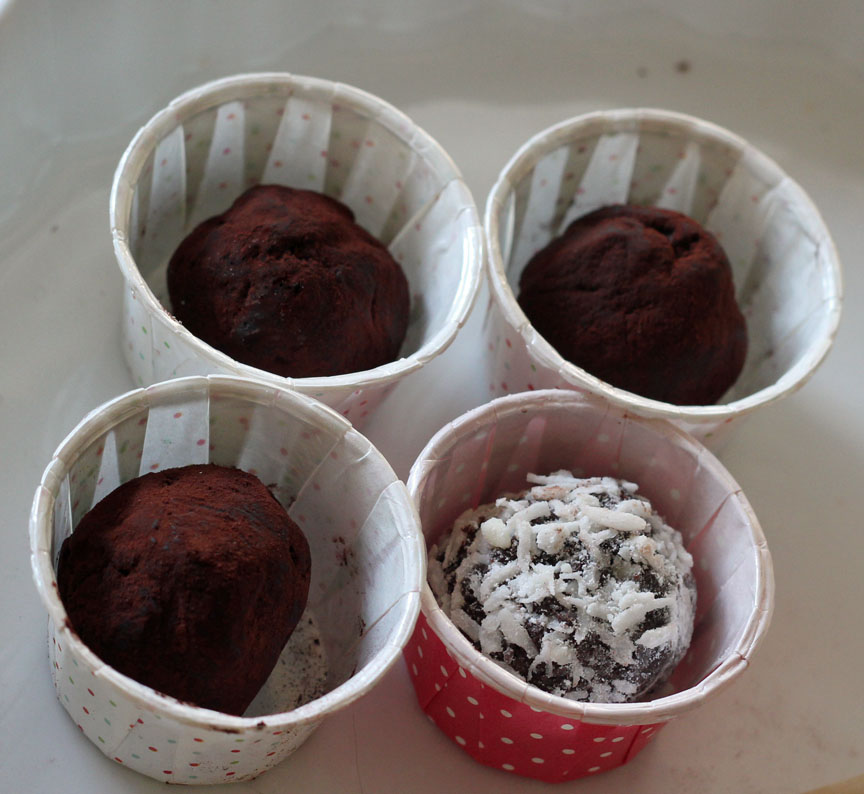 If you've been reading my blog, you'll notice that chocolate is a familiar topic. In my world, you just can't go wrong with chocolate, the result of the magical transformation from the cacao bean.  Really, cocoa in general. From chocolate chili waffles to chili to the most recent chocolate blocks, a little chocolate and/or cocoa added depth to the food. Now that it's Holiday baking time and I have to think of delectable gifts to send to recipients who'll appreciate homemade food, I've been thinking a lot about truffles. Some of the best chocolate truffles I've ever had were not expensive yet had just the right creamy middle and a lusciousness as it melted on my tongue.

I researched online and in my many cookbooks to find just the right recipe to try. I don't want to spend all day on it or bother with tempering the chocolate. It's my first time making truffles so I thought I would find recipes that are easy to do but delicious. That's the way to gain confidence to harder recipes. The first recipe I tried is a vegan one because I had to mail out a package for a vegan giftee. I have a tendency to come up with lovely ideas for gifts for the Holidays but get sidetracked by work or life in general. Then there's the gift wrapping, boxing and actually mailing it part. This year, I am determined to send my packages on time before I get overwhelmed and give up. That is, I'd end up going on Amazon to get a deal or give the gift certificate.  Now, I am not against giving gift certificates if you know for sure that the recipient can use it. I find that many people give gift certificates without thought of whether the recipient can use it. For example, giving someone a restaurant gift card for a restaurant nowhere near where recipient lives!  But I digress. While I still had the enthusiasm for making Holiday gifts, I went right into it this weekend.

There were not too many vegan truffle recipes that I could find and did not involve too many ingredients. I did, however, get this month's Whole Living magazine and was happy to find a vegan dark chocolate recipe there. In fact, I was thrilled because it involved all ingredients I already have at home. Here is their full recipe:  Dark Chocolate Truffles

I used Trader Joe's semi-sweet (65% cocoa) chocolate callets. Unfortunately, my local Trader Joe's no longer stock these.  They are great for these project - no chopping chocolate chunks. For the cream portion, this recipe cleverly used coconut oil. I used what I had on hand, which was the Nutiva coconut oil. I was a bit afraid at first of the coconut scent overwhelming my little nuggets of chocolate goodness. But no worries, they just had a hint of coconut flavor.  I started the process in the night and ended up putting the bowl into the refrigerator. Next time, I won't do that. It really hardened the chocolate. Although the chocolate came back to room temperature after sitting on the counter for some time, it ended up with a hard top shell. That kind of ruined my lovely creamy truffle but I tried to minimize rolling that top shell in. 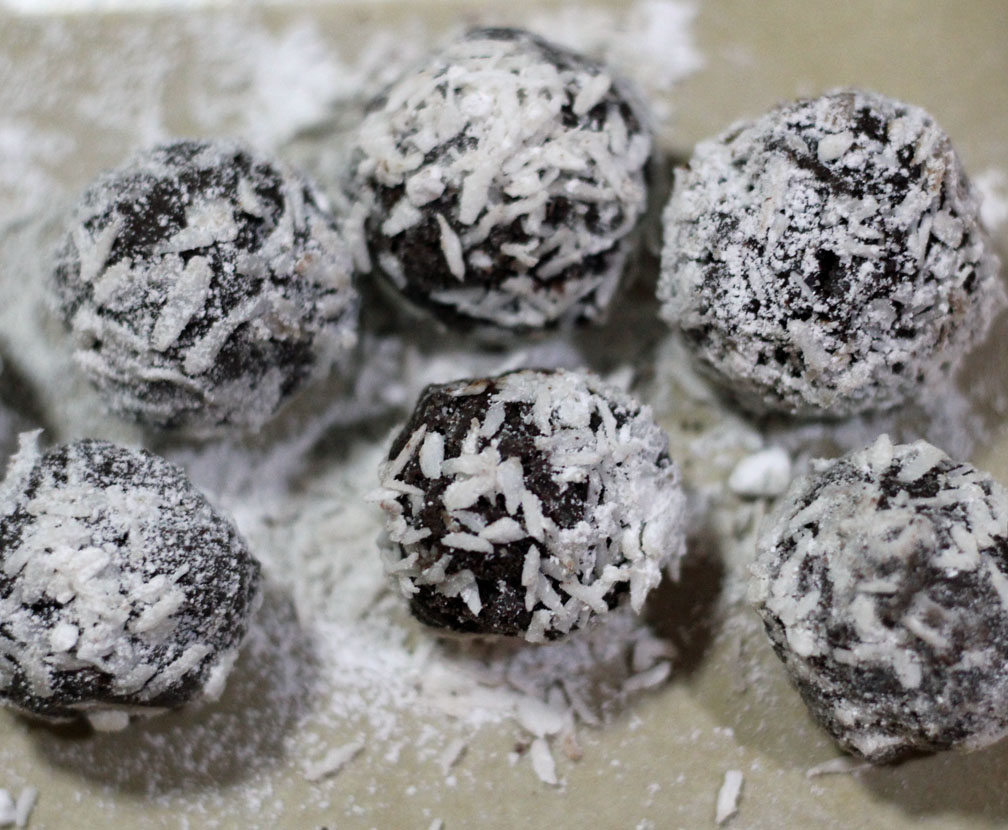 I rolled some of them in unsweetened, medium shredded coconut flakes but some just refused to stick on so I thought it would look prettier if I sprinkled on powdered sugar. Ta-da! A little snow on the dark chocolate truffles. I rolled the other half in Valhrona cocoa powder. Why not go for the best when you are making truffles, right? These had a dark chocolate flavor and creamy middle.
Posted by Unknown at 9:03 PM