Can It Up: 2nd Round of Apples 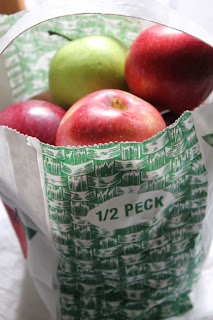 Hima's post at All Four Burners about her vanilla rum Apple Butter sounded so delectable that I had to do it too.  I've had great success using my Crockpot/slow cooker for blueberry lime butter. I must thank Marisa at Food In Jars for her wonderful instructions and encouraging voice. When I read Hima's apple butter, I was intrigued.  The flavor profile just sounds so good.

I already participated in October's Can It Up with my Candied-pickled Apples but what the heck, I've got more apples at home.  I had to make some modifications but for the most part followed Hima's recipe so I won't rewrite the recipe here.  You can click on the link above at All Four Burners for the full recipe.  Here are my modifications in case any of this may help anyone else making it. 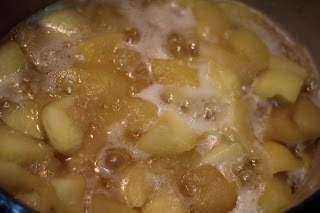 I had five pounds of apples (granny smith and Fuji, and a couple of Liberty) but a couple of them went bad. I ended up with four pounds of apples so I cut the recipe by 2/3.  I used 1 1/3 cups apple cider instead of 2 cups. Also 1 1/2 cup sugar. I had vanilla beans and put those in my coffee grinder (after cleaning it of course) and ground it up.  Unfortunately, it was not as ground up as I'd like. As for the rum, toward the last 2 hours (it's hard to predict the exact amount of time due to apples) I added 1/4 cup then at the last hour, added more for a total of about 1/3 cup rum. My yield was five 8 oz. jars. 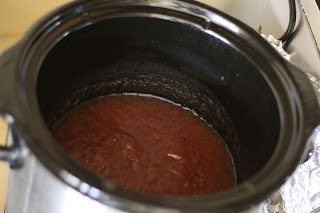 Just a note about canning if you are new to this.  The amount of liquid in the fruit varies so the cooking time in recipes will be an estimate.  You may have to cook your fruit for a longer period of time because your apples are juicier or vice versa, less cooking time because your apples are less juicy.  Check it often.  I originally used my little slow cooker (1 1/2 quart), which was a gift I got one year.  It was filled to the top with my four pounds of apples.  After cooking the apples in it overnight, I realized that I had to switch to my bigger slow cooker, the 4 quart.  That was just perfect.  Overall, it took almost 12 hours for me on low in the slow cooker.  It may have taken a longer time because my first pot was too small so that the liquid did not evaporate as well.  At the end of the day, I got five jars of delicious apples. 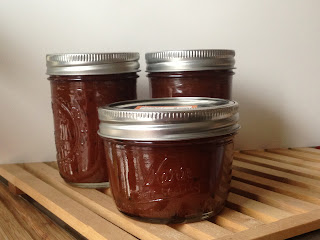 Email ThisBlogThis!Share to TwitterShare to FacebookShare to Pinterest
Labels: apples, Can It Up, canning, rum, slow cooker